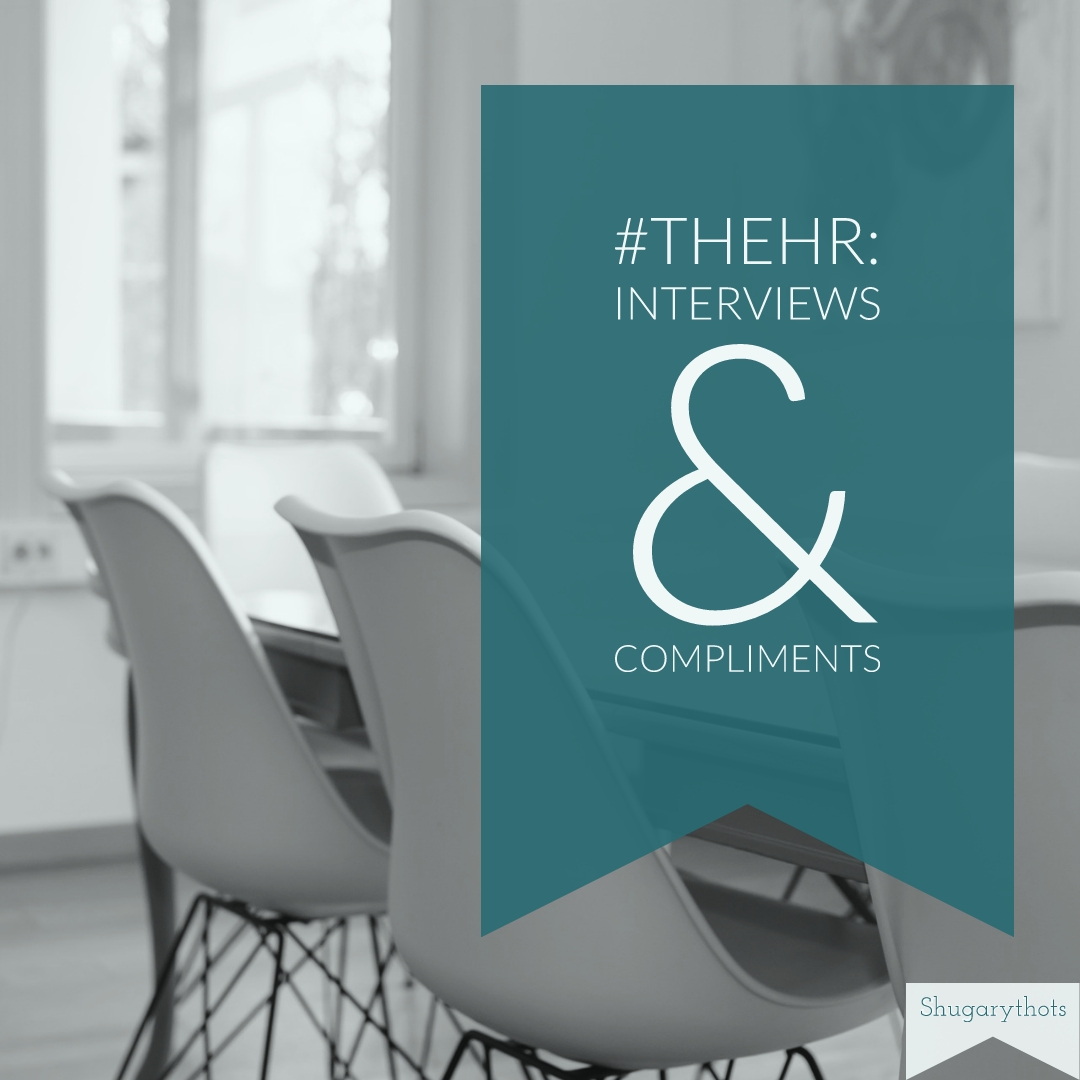 As someone interested in HR and actively working towards a career change, when I saw the tweet below it got me thinking. What do you or not do at an interview? 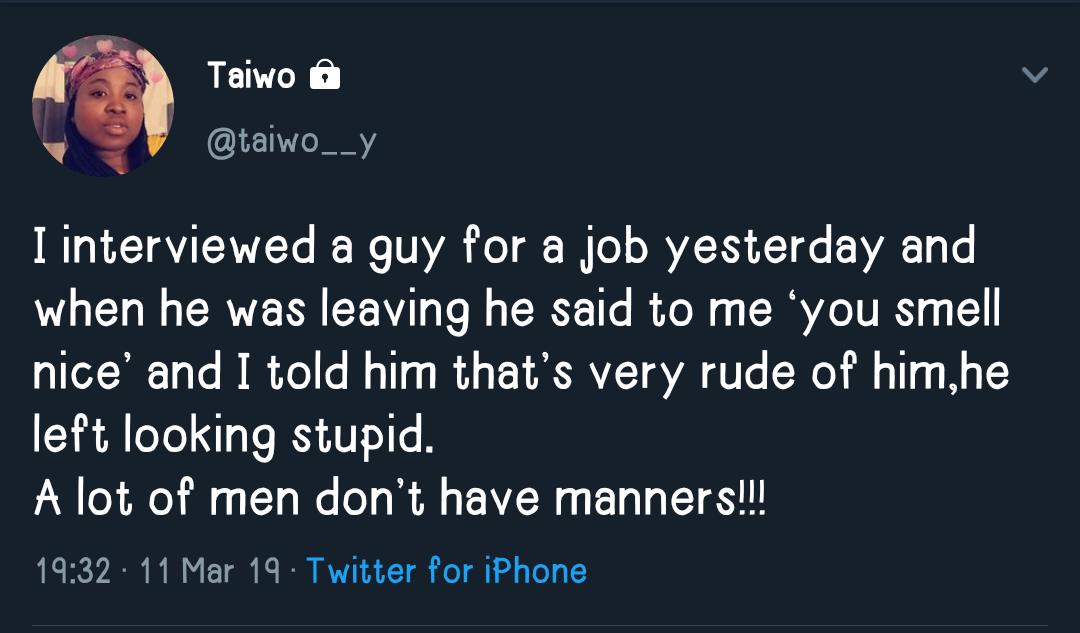 I began to evaluate all the times I had ever complimented people on the pleasant scent and feelings I got when I was around them in the elevator, at the bus stop, and at random events and places.

As a wise man once said in the multitude of counselors there is safety so I decided to seek opinions on this.

Here are some thoughts I got:

“She’s not alright upstairs. No explanations. She’s just not alright”

“This one that doesn’t know what is doing her.
I don’t blame her sha, she’s a typical girl with typical African mentality. I don’t expect much from her. She isn’t woke.
Woke people would appreciate the compliment, except if she knew she wasn’t smelling nice….”

“Such compliments are unprofessional (According to Joe Abah) and I agree with that. The guy shouldn’t have given such compliment. However, the lady didn’t handle it well, she should have understood the guy’s ignorance and accept the compliment then explain to him compliments like that might mar his chances in the future. Lastly, she was overly sexist by saying “a lot of men are mannerless”. When did that become a gender issue? it could be anyone male or female”

“Lol, it’s just a compliment I guess. Even I can tell a fellow girl that, or a guy sef. it’s not gender based”

“There is a time and place for everything and that place was not it at all. Moreover, he despises the interviewer by that act and wants to make her look small”

“To me, I feel she thinks she is doing him a favor and so she has an upper hand over him so he should overly respect her. Or she has esteem issues. One of the two sha”

“I think it’s nice. It’s a compliment. Tho it sounds a lil bit flirty”

“Because it was a professional atmosphere he should have kept quiet. Is he trying to gain brownie points?”

“Lol, I don’t even know what to think😂. I thought it was meant to be a compliment 🤷‍. Lol, some women en, just say thank u and move on life is not hard”

“Lmao. That would’ve gotten him the job in a civilized society. But we dey Naija where everybody is angry. Compliments now seem “rude”

“Well some might think it’s unprofessional, some might be flattered really just depends on the person. But I wouldn’t think it was a big deal if someone I interviewed thought I smelt nice”

“I can only see a guy complimenting a lady after an interview. I expected the lady to humbly say thank you. However, something else might have prompted the girl to react in that manner.
1.) It is possible that the body language of the guy displayed rudeness. Even at that, it is still a compliment and should be appreciated.
2.) The girl is just proud and arrogant, and may be the bossy type.”

“Being in a position to interview someone means she should by default be wise and educated enough to know that she was being complimented. I agree that guy didn’t use the right language, but no one would risk being rejected by flirting with his interviewer.
Maybe she forgot to wear her perfume and was uncomfortable but composed, then the guy came and ruined everything by saying ‘you smell nice’.”

“That’s what you get when some women wear the toga of “men are trash” around the corporate environment. What’s with the compliment if that was all he said. If anything at all, acknowledge the compliment and let him know that may not be appropriate in such setting as the interview; definitely not rudeness! 😪”

In my opinion, the “you smell nice” was inappropriate to a large extent. From the tweet alone and without being a fly in the room we can not possibly tell the mood of the interview room or how the interview went.

If at the end of the interview, they were all laughing and it had turned to be an almost casual chat between the candidate and the interviewer then he could have phrased his thought of “you smell nice” in a better way.

To this end,  I don’t think he read his environment well before saying that. The point is to get your message across without sounding patronizing or flirty. If in doubt on if the message is appropriate or inappropriate, then it’s best to keep quiet and move along.

As an HR interviewer, you are to be seen as emotionally intelligent and professional. If you think the statement was rude or was inappropriate then you put him straight politely. “Thank you but I don’t think this is the right setting. This is for future interviews”  sounds better than outrightly saying “you are rude”. This should have been a teachable moment!

Can all these be described as some form of miscommunication? Probably

Should his statement affect his hiring chances? No.

Should she have used this experience to class all men? Still No.

This should not even be brought up as a gender issue.

Do women have a choice to accept or reject compliments? Of course, all humans do in fact. No one is implying women (or men) should always accept compliments including ones they think are inappropriate.

Finally, humans are emotional beings and because of this, we will always have varying opinions and responses to things and situations.  The aim is to respond in a seemingly appropriate manner.

P.S: Are we entitled to respond to every compliment we receive?

When we give a compliment, does it mean we are entitled if we expect a response?

What's your thought on this? Cancel reply